Singapore is such a diverse and rich country that, despite its size, there are plenty of things to see and do. The city-nation that is home to nearly six million people is a melting pot of different cultures from all over the world.

Here, East meets West. The Singaporeans value their history and tradition, but the people have embraced modernity in many aspects of their lives. The Southeast Asian country has also managed to let nature coexist with urban life. Alongside the offices and malls are gardens where trees grow tall and flowers bloom.

The Architecture in Singapore

Singapore is a top destination for tourists for many reasons, including delicious food, an energetic nightlife, friendly and gorgeous people, and, of course, breathtaking sights.

While the city-state is not exactly known for its natural wonders (although there are plenty), tourists still visit to see buildings that reflect everything that makes Singapore such an interesting place. Whether you are a fan of architecture or you want to get to know the country better, here are the buildings and places that you need to see when in Singapore: 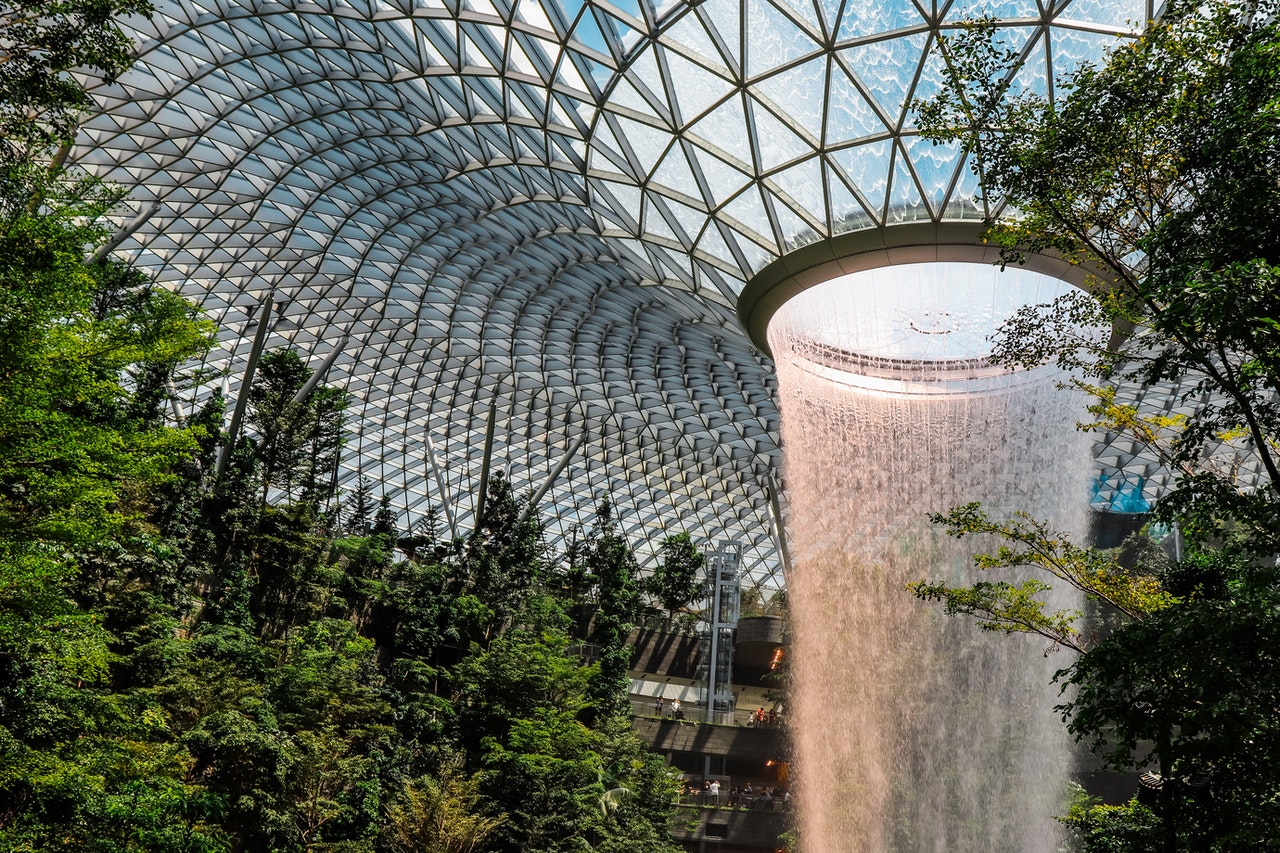 Changi Airport is not just an aviation hub for international travel. It also serves as a lifestyle mall for tourists and locals. There are so many fun things to do in Changi. You can go shopping at the outlet stores from international brands. You can also go on a gastronomic trip around the world by trying out the dozens of restaurants within the facility.

Or, just look around and admire the architectural marvel. The Jewel, the newest building in Changi, is very impressive. It was designed by Moshe Safdie, also the genius behind the Marina Bay Sands, one of the most recognizable landmarks not just in Singapore but across Asia. Although the entire building is awe-inspiring, what you must see is the Rain Vortex, an indoor waterfall where water falls from the ceiling to the basement. At 40 metres, it is considered the tallest indoor waterfall in the world.

Durian is a fruit that is native to Southeast Asia. It has a prickly, green, hard skin that reveals a golden, buttery, sweet flesh inside. It is also very stinky.

It is a very divisive type of food. While the locals and many tourists love its taste, others dislike it. Singaporeans, however, love it so much that they made durian their national fruit and they created a theater inspired by its exterior.

Esplanade, which opened in 2002, is made with more than 7,000 triangular aluminum sunshades to resemble the peel of the popular fruit. Initially, the spikes were not part of the design. The plan was to have the two glass shells as a dome. However, people pointed out that the glass shells would only create a greenhouse effect which led to the addition of the coverings in the form of spikes.

Singapore did not try to hide or demolish its old buildings to pave the way for new ones. Up to this day, you will see old buildings that reflect the nation’s colorful past.

The Fullerton Hotel was built in 1928 when the island was still under the rule of Britain. Back then, the building served as the General Post Office.

The building survived the arrival of Japanese forces during World War II and became the backdrop of the battle for the nation’s fight for independence from British colonizers, which they finally got in the 1960s.

The Fullerton Hotel remained unused for decades until 2001 when it was renovated and turned into a luxury hotel with 400 rooms. In 2019, Architectural Digest named it as one of the most iconic hotels in the world in the last century alongside Chateau Marmont in Los Angeles and Le Bristol in Paris.

Singapore has plenty of temples, some of which are over a century old. Sri Mariamman Temple is one of the most popular because of the brightly-colored and ornamented tower that stands at its entrance.

Initiallly called Mariamman Kovil or Kling Chapel, Sri Mariamman Temple first opened in 1827. However, most of the structure that you would see today was built in the 1860s by craftsmen from South India.

It is dedicated to Mariamman, a goddess known for her power to cure the sick.

Sri Mariamman Temple is a well-known landmark across the city-state. It is found in Chinatown.

There are many more architectural wonders to see and explore in Singapore. Those that are not mentioned in this list are Marina Bay Sands and the Cooled Conservatories at the Gardens by the Bay. If you are planning to visit Singapore soon, include these places in your travel itinerary. If you have the time, just walk around the streets of Singapore and you will discover more amazing sights.