Have you ever been to Singapore? Sentosa’s beach restaurants, spas, and theme parks are the first things that come to mind when people think of Singapore’s state of fun, but there are some surprising sites that the 500-hectare island has to offer to visitors.

But first, a little history: Sentosa was known by a variety of different names before its official renaming in 1972. In 1604, explorer Manuel Godinho de Erédia called it Pulau Blakang Mati, which meant “Island of Death Behind,” an ominous name to be sure. Still, it referred to the island’s ‘dead’ waters, a nautical term which meant that there was no wind that passed behind the island.

It was also known as Pulau Panjang, but it was only in 1972, when the Singapore Tourist Promotion Board ran a competition to rename the island, that the government officially renamed the island to “Sentosa,” a Malay word that means “Peace and Tranquility.” Almost 50 years later, Sentosa has transformed itself into the world’s premier tourist and entertainment destination, with world-class theme parks, hotels, and even a golf course.

But there are some aspects of Sentosa that have shied away from the public eye that might surprise you. Here are three of the most surprising sites in Sentosa:

The Hidden Beach of Tanjong Rimau 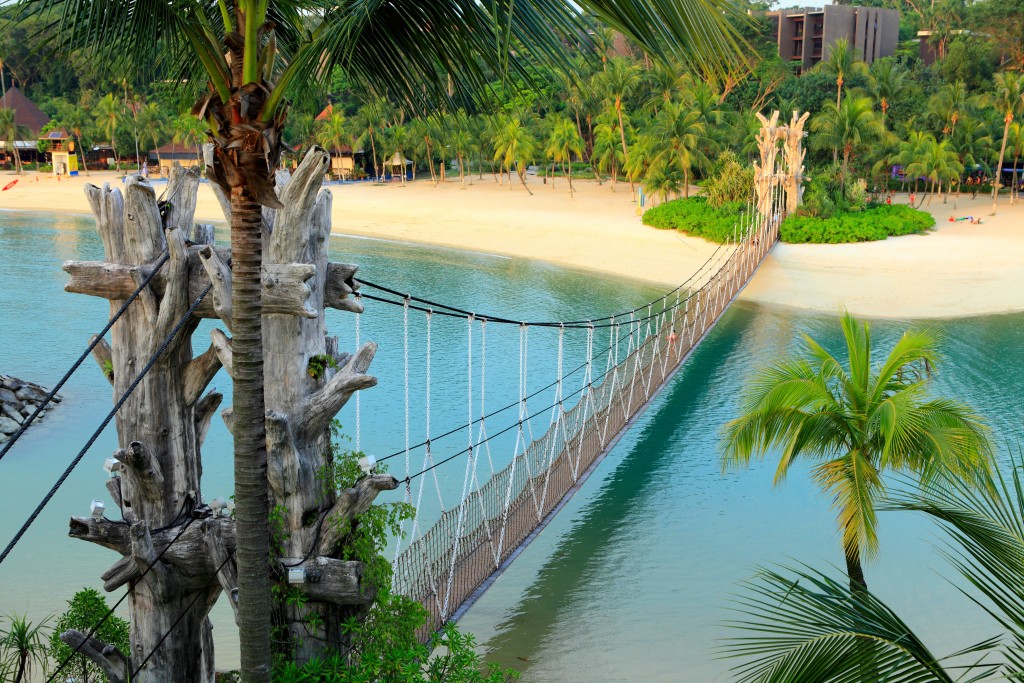 For a relatively small island, you’d think that every nook and cranny of Sentosa would be chock-full of tourists, but you’d be wrong. There is, in fact, a small strip of land that not many people know about called Tanjong Rimau. It is perhaps Singapore’s remaining natural coastline, devoid of any commercial structures. This means the Tanjong Rimau also has some of the clearest waters you can find in all of Singapore and is the best place to see Singapore’s unique and diverse marine wildlife, from colorful coral reefs to crabs and octopuses.

Walk on the Wild Side

For all its glitz, glamour, and luxury, almost 70% of Sentosa is covered in lush, green rainforests, making it home to some of the rarest and most diverse wildlife on the planet. This means that Sentosa is also home to rare wildlife habitats unlike anything else on earth, like the Butterfly Park & Insect Kingdom, where you can find more than 15,000 live butterflies and over 3,000 different species of insects.

Are creepy crawlies not your thing? Then check out Sentosa Nature Discovery, where you can catch glimpses of rare, wild monkeys, monitor lizards, and the endangered magpie robin, all while going through the park’s almost 2-kilometer Nature Walk through thick jungle.

It’s no secret that Singapore is home to the largest concentration (1 in 6 people) of millionaires in the world, with plenty of opulent attractions both in the mainland and in Sentosa. But if you want to feel like a Crazy Rich Asian, head down to the rotunda at Hotel Michael, where you’ll find a real-life treasure chest of sorts: a gold-dispensing ATM.

That’s right; there’s an ATM in Sentosa that dispenses real gold bars and silver ingots for cash. The prices change twice a day to reflect current market prices, but expect to pay around SGD$80-100 for a 1 gram gold bar, and up to a whopping SGD$2,000 for a 20-gram gold pendant.